Have we reached some form of equilibrium in the markets when investors can pause for breath following a dreadful six months for investors? The markets managed to eke out a small rally on Friday despite the futures opening down sharply in the red earlier in the day. Perhaps it was just a sigh of relief that the quarter was over and the third one had just started. The S&P had it’s worst six months in 52 years, down 20.6% YTD The Dow is down 15.3% YTD and the Nasdaq is down 29% for the first 6 months, it’s largest drop on record. After a rally on the first day of the third quarter, the S&P is 3.2% off it’s 2022 low close of 3667.77 which was hit on June 16th. 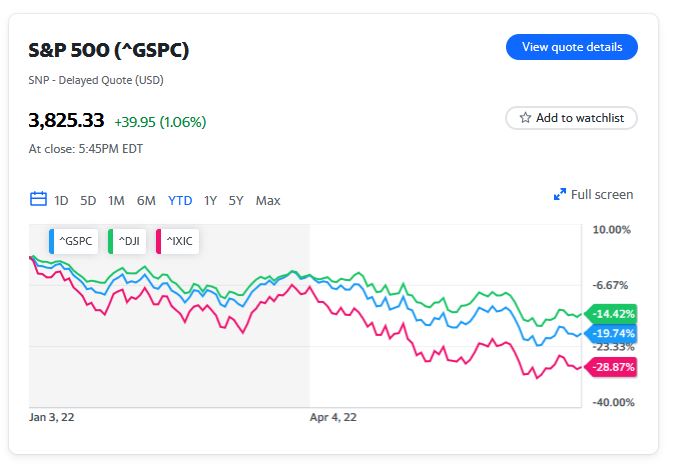 Equilibrium for the time being?

Some calm returned to financial markets on Friday, the first day of the new quarter. How long this will last is anyone’s guess. For there to be a meaningful rally, there are three current trends that investors can watch. Firstly, the oil price which closed at $108.46 is off it’s highs of around $130 but is not meaningfully lower. Another spike in this will be badly received by the US consumer despite the Democrats insouciance about it’s effects. The 10yr Treasury closed at 2.9% last Friday, down from it’s recent high of 3.5% and thirdly, Bitcoin closed at $19,275, off it’s intra day lows of $17,600. So a further fall in the oil price and Treasury yields will be well received by financial markets and equilibrium in the Bitcoin price all might persuade investors to adopt a more risk on strategy. A rally to just over 4,000 is not inconceivable with the 50 day MA of 4,056 providing resistance.

The problem with any rally is that markets are not cheap at the moment on a historical level. Financial analysts are still too optimistic with their future predictions and the S&P is selling on 16.7 forward earnings which is no give-away for investors. Just to put this into perspective, in the midst of the sub-prime crisis, the S&P was selling on 8 times and it’s low for that period was the dreaded sign of the Devil, 666.

Any decent rally in this market, which is quite possible, is a bear market rally  and is one to sell into and we have yet to see the lows. Several  strategists are talking about the lows coming in at a range between 3,000 and 3,200. Before readers heave a sign of disbelief at these prognostications, let’s not forget that the pandemic lows which took place on March 3rd, 2020, were  2,237 before the S&P doubled from there. So, it’s doubtful that equilibrium in financial markets will last long unless there is a substantial and enduring fall in inflation and the Fed is persuaded to temper it’s interest rate rises.