The Fed’s reluctance to acknowledge the threat of inflation early enough has led them to ratchet up rates in an aggressive manner unseen for over thirty years. Their move to raise rates by 75 basis points has led many to question whether Powell will tip the US into recession this year rather than the oft quoted remarks that the recession will come next year. When central bankers forget that their primary concern is price stability and money supply and ignore clear warning signs of asset bubbles, a serious problem generally occurs.

We are at that point now and who can help but agree with El-Erian, quoted on Yahoo finance today that “It is, unfortunately, uncomfortably possible that the Fed is going to slam on the brakes and push us into recession.”

This is what happens when central bankers ignore their responsibilities and become a quasi government quango. Who can really be surprised? Trump leant on Powell and latterly, we have Janet Yellen serving as the 78th United States secretary of the treasury since January 26, 2021. For those of us who have been used to her somnolent tones as previous Fed chairperson, we can hardly been surprised, given her dovish track record at the Fed.

The Fed is not the only central bank that has let the inflation genie out of the bottle but it is hard to believe that compared to it’s peers, it is almost head of the curve. The BoE recently raised lending rates by 0.25% to 1.25% whilst the Consumer Prices Index (CPI) rose by 9.1% in the 12 months to May 2022, up from 9.0% in April. This is the highest CPI 12-month inflation rate in the National Statistic series, which began in January 1997. So, even though I am not a a lauded economist, it appears that the UK has negative interest rates of 8%. With the rotund and highly remunerated Governor of the BoE, Andrew Baily, under pressure from baying politicians of all parties, and let’s not forget that hell hath no fury like  politicians in an indignant parabola of feigned outrage, one wonder what lies in store for the fragrant Christine Lagarde at the ECB.

She is too scared to raise rates in case she tips the soft underbelly of Europe, that means the likes of Italy and Spain into recession. Italian 10 year BTPs recently spiked to a 3% premium over 10 year German Bunds. One wonders what the grizzled elders of the Bundesbank are thinking. Thank God they cannot remember the travails of pre-war Germany of buying a loaf  of bread. 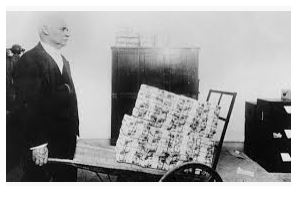 Mind you, you might need a wheel barrow full of USDs to buy baby formula in the US under Geriatric Joe’s flatulent Presidency.

There is a theory that inflation can be good for equities but when it causes bond yields to spike and interest rates to rise, it can be seen as a total fallacy. What inevitably happens is the reality of recession. It is only a question of how severe it’s going to be.

Let us look at a chart of what a recession  has done to the US  stock market over the years.

So will central bankers “fess up” to their failings? I have no idea but until central banks reassert their independence, little will change but the warning signs are ominous for the stock market and the economy.

That doesn’t mean that the stock  market cannot rally from here in the short term.